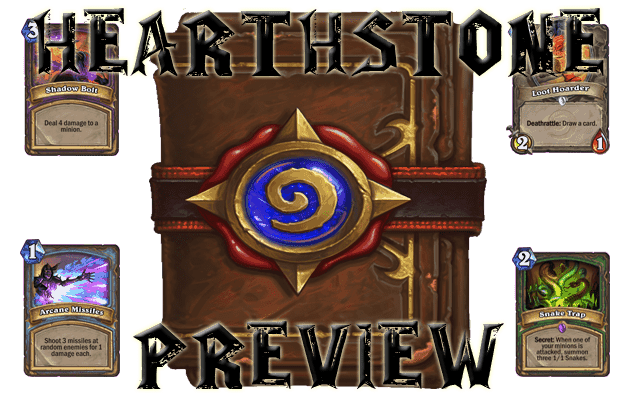 Amidst the endless flood of carbon copy MMOTCG games comes a shining beacon of hope from award-winning developers Blizzard. MMOAttack were lucky enough to get the opportunity for a hands-on preview with Hearthstone: Heroes of Warcraft.

Hearthstone: Heroes of Warcraft is a digital tactical card game supported by the constantly expanding lore and characters of the Warcraft franchise. With Blizzard at the helm Hearthstone has the advantage of the experience and services associated with the king of MMO developers , but how do the features stack up?

Hearthstone introduces players to the world of the TCG via a staged tutorial that explains some of the more unique features and mechanics seen in the game. Among these mechanics is the introduction of Champions, in-game characters that represent the core cards available when constructing your deck and also their Champion exclusive ability. There are currently 9 Champions in the game each of which are inspired by classes and characters available in the Warcraft universe. Players are free to switch between classes whenever they please, assuming they’re not in battle.

Each Champion comes complete with 20 basic cards, 10 of which must be unlocked through progression, with these cards forging the foundations of any deck constructed with that Champion at the helm. For example if you create a deck with Rexxar The Hunter, you’ll be able to use his beast abilities and combo attacks alongside cards you’ve unlocked that are available to all classes.

Every Champion can be leveled individually with the current level cap sitting at level 60. Reaching level 10 will unlock all of the basic cards for that Champion, giving the player the tools they need to begin their efforts with a custom deck. Progressing past that point rewards in-game currency, gold, and occasionally rare cards.

As well as the benefits of a particular Champion’s basic cards players also get access to that Champion’s unique attack. These come in a variety of shapes and sizes including summoning additional Minions (cards), healing allies or dealing direct damage to enemies. Finding the perfect balance of a Champion’s basic cards and abilities that work well with a players play style is challenging but a highly important aspect of the TCG genre.

Once players clear the brief tutorial they’re free to progress with any of the Champion’s available. Progression up until level 10 can be done against AI opponents in practice modes but post level 10 players will have to compete in either the Play or Arena modes. Both modes are identical in terms of game-play but Arena offers better progressive rewards as it requires an entry fee.

There are 3 distinct types of cards within Hearthstone including Minion Cards, Equipment Cards and Spell Cards. Minion Cards represent the core of your deck as you summon them to battle, destroying enemy Minions and dealing damage to the opposing Champion. Equipment Cards are exclusive to your Champion increasing the power of their unique ability or providing them with additional attack power; making them behave in a similar way to that of the Minions; and finally, Spell Cards. These powerful cards come with an array of exciting perks including the ability to steal cards from your opponents hand, lay traps on the board and even destroy everything in play.

Every card comes complete with extremely detailed character and image art, giving each card its own unique look and personality. Most cards also come with attached sound effects that are played when summoned or during battle.

No TCG game is complete without those ever elusive cards and Hearthstone features several variety levels. There are four basic levels of rarity value such as Common, Rare, Epic & Legendary. The rarer cards are usually far stronger and can be disenchanted for higher levels of Arcane Dust (we’ll get to that in a minute). Every type of rarity also has the potential to be a Gold Card. Gold Card’s come in all forms, from Common to Legendary, and they feature custom animated images and a gold border. Every TCG player has cards they value above anything else in their deck and getting that same card in golden form is nothing short of epic.

There are currently 3 game modes available in Hearthstone, Play, Practice and The Arena. Play and Practice modes gives players the opportunity to test their abilities against both other players and AI opponents. These are also the only game modes that support custom decks, decks created by players using a combination of basic and all-class cards. Play mode also features Ranked where players can accumulate wins to increase their overall rank. Unlike other TCG and competitive games a players rank is based solely on the amount of games they’ve won, not their w/l ratio.

The most popular game mode among the community is The Arena. Currently players must pay a fee to enter The Arena, which is either 150 in-game gold or $1.99 cash, but the mode does offer the best payoff of all the modes. Players are tasked with winning as many games as possible before they accumulate 3 losses. The more wins players are able to get before being knocked out, the greater reward they receive. Rewards include gold, booster packs, cards and Arcane Dust.

Instead of using custom or predetermined decks players go through the short process of selecting cards available to that class and discarding others, in effect creating a slightly randomized custom deck just for that attempt in The Arena. If you’re skilled enough to accumulate 5 or more wins you will earn your entry fee back as well as other prizes on top but it takes a pretty skilled player to reach the 5 win mark.

Quests are also given on a daily basis which can usually be completed across all modes. They vary in objectives, such as defeating X amount of Minions or winning X amount of games with a specific Champion, but they’re generally easy and offer quick ways to earn gold.

Arguably one of the most discussed features relating to Hearthstone: Heroes of Warcraft is the crafting system. A feature that has grown in popularity with the TCG fans of today gives players the opportunity to create cards from an in-game resource, Arcane Dust. This dust can be received as an award from The Arena but is most commonly collected after disenchanting unwanted cards.

The amount of Arcane Dust received varies depending on the rarity and value of the card but this does mean that even rare cards that you wouldn’t use in your deck have a very valuable use. Players can craft practically any card in the game using the Arcane Dust system so even if you’re a little lackluster in The Arena there are other ways to obtain the cards you desire.

The game mechanics themselves borrow elements from many popular card battle franchises. Both players begin the game with a selection of cards with the ability to swap them for random cards from their deck. Once both players have made their choice the game begins.

The player going first is chosen at random but balanced by offering the opposing player a free mana point or additional card. From there players take it in turns to draw a card each turn before choosing their action.

Any action involving cards usually costs mana points which are accumulated as the game continues. Both players begin with a single mana point but further points are rewarded and replenished as the match continues. Players are free to spend as much or as little mana as they please, but it doesn’t carry over to the next turn. In true TCG fashion this means players are able to summon multiple Minions and Spell Cards for an all-out attack, or they can choose to counter their opponents actions and play more conservatively.

The Hearthstone: Heroes of Warcraft is the holy grail of MMO beta’s at the moment. Thousands tune in to popular streams with the hopes of winning key giveaways while others flood the official Facebook page for Blizzard giveaways. Blizzard have yet to release information regarding a release or open beta date but keep your eyes glued to MMOAttack for an official review soon.