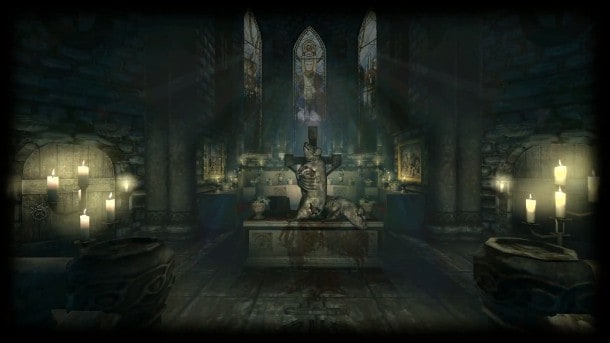 Amnesia: A Machine For Pigs is a very different game from its predecessor, The Dark Descent. Gone is the inventory system, sanity meter, and health bar. Gone is the constant, intimidating presence of Brennenberg’s monsters. Gone is the beast that ruthlessly pursues Daniel through the castle halls.

What’s replaced all of these is arguably far worse. A Machine For Pigs has nearly tossed out the ‘survival’ aspect of the survival horror genre, replacing it wholesale with a healthy dose of mind-shattering psychological horror. You’ll be at least as scared playing A Machine For Pigs as you were playing The Dark Descent, though not necessarily for the same reasons.

I’m going to say it right now: the folks at The Chinese Room are masters of atmospheric horror, particularly in terms of sound design. The soundtrack is, without a doubt, the most frightening aspect of the game – nothing else even comes close. Both the game’s sound effects and ambiance combine to create a gnawing, scraping sensation of fear that claws ceaselessly at the back of your skull, setting you on edge almost the moment you step into Oswald Mandus’s estate. None of the sounds – from the violent, wrathful banging of The Machine to the squeals and howls of pigs – are pleasant, and all of them together will make the hair stand up on the back of your neck.

Of course, the environments are disturbing enough on their own, if you’ve a keen eye. Little bits and pieces you see lying around combine into a distressing narrative, made all the worse by the fact that Oswald Mandus is very clearly not a good person by any stretch of the imagination. You’ll see things out of the corner of your eye. You’ll look at disturbing, disgusting paintings. You’ll see piles of pig corpses, only to realize that they aren’t pigs. You’ll feel, in your gut and in your bones, the overwhelming sense of wrongness that permeates nearly every pixel of Mandus’s estate and factory.

When the monsters finally do show up and start hunting you, it’s almost a disappointment – the game does such a good job of creating tension and making you afraid of what isn’t there that it’s underwhelming when something actually does confront you. That isn’t to say the beasts aren’t frightening on their own: pound for pound, I actually found them considerably more disturbing than Alexander’s Wretches and Brutes, if only because they were so unpredictable. In The Dark Descent, you could be sure that solving a puzzle would cause a monster to appear.

In A Machine For Pigs, you might go through an entire subsection of the basement completely alone, only to have a monster sideswipe you just as you near the exit, or you could be hounded by one of the beasts the whole way through, only finding respite when you leave. That said, the monsters don’t really seem to be the focus of Machine For Pigs. The game, it seems, is much more interested in messing with the player’s mind than it is putting them in too many truly desperate situations. Somehow, that makes it even more terrifying.

My one gripe with the game is that it doesn’t quite feel long enough – I’d estimate that it lasts somewhere around five hours. To me, that’s a minor issue; one which should be easily rectified once player-made content starts hitting the Steam Workshop. Those of you who are interested can pick it up on Steam for $20. You won’t be disappointed, I promise you.