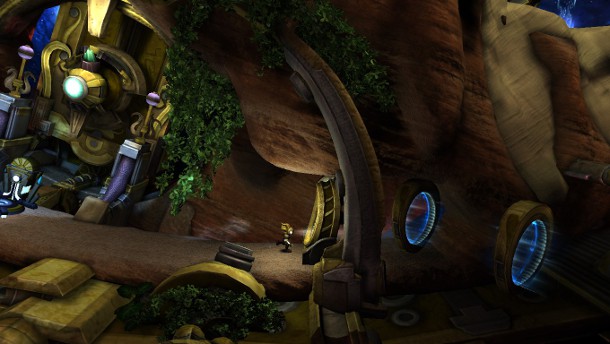 The sun is dying; infested by a race of deep-space parasites known only as the Ramora. The Eldritch Monstrosities have spread like locusts through the solar system, consuming whatever light sources they can sink their teeth into. Left unchecked, these abominations will inevitably consign each and every planet in the sun’s orbit to a slow, cold death.

Naturally, they’ll move on to another solar system after that.

You are Shiner, a being of pure energy given form by an ancient suit of armor. From what I understand, you’re basically a kind of intergalactic exterminator, tasked with ending the Ramora threat and restoring the sun to its former glory. If you fail, everything dies. No pressure, right?

In order to oust the Ramora from the sun, you’re first going to need to save each individual planet. See, the entire solar system is peppered with what looks like the inner workings of some massive, ancient machine. This machine connects each of the planets to one another and, in turn, to the sun; it’s also the mechanism through which Shiner will defeat the Ramora for good. None of that’s really made clear to you, of course – it’s all just conjecture on my part.

Whatever the reason, as Shiner, you’ll have to make your way through a total of five distinct worlds before finally arriving at the sun. To help you along, you’ve got something known fittingly as The Glare – a focused beam of light which emanates from Shiner’s eyes.

This light is pretty much the core mechanic of the game; as you progress through the solar system, you’ll use it to make plants grow, defeat enemies, protect yourself from projectiles, and activate a whole array of different machines and devices. As you continue on, you’ll also gain access to a gun, bombs, and a whole array of other upgrades.

By default, all weapons fire in whatever direction your character is facing; you can change direction through the use of a second set of keys (or, in my case, the other thumbstick;  Glare feels as though it was essentially designed to be played with a controller). This adds a whole new dimension to the game, and leads to some pretty awesome segments (for example, sliding down the side of a mountain while fending off clouds of enemies.

The pacing of the game is such that no upgrade ever feels obsolete or poorly timed. Each stage is designed so that you’ll have ample time to learn new abilities even as they challenge you to master everything else you’ve already got at your disposal; most segments have just the right amount of difficulty to be challenging without getting frustrating.

It probably helps that the game’s downright gorgeous, as well. Glare is, without a doubt, one of the most beautiful platformers I’ve ever played. The backgrounds are beautifully drawn, the lighting effects are fantastic, and the animation is top-notch. Even better, there’s some nifty 2.5D effects that cause the terrain of each level to ‘curve’ as you get closer to the center.

I’ve only two gripes with the game: the first is its length. I was able to complete Glare in a single sitting; about two and a half hours worth of gameplay. The second is the boss battles. At the end of each world, you’ll do battle with an infected ‘core.’ The basics of the battle are pretty much the same every time: clear away the shell with your glare, shoot at the unprotected center of the creature, rinse and repeat. Though each new core has a few new tricks up its sleeve, the battles do tend feel a little bland.

These are minor stumbling points. Glare is still a fantastic game – more so when you consider the fact that it’s Phobic Studios first step into PC development. You can pick it up on Steam for $14.99.