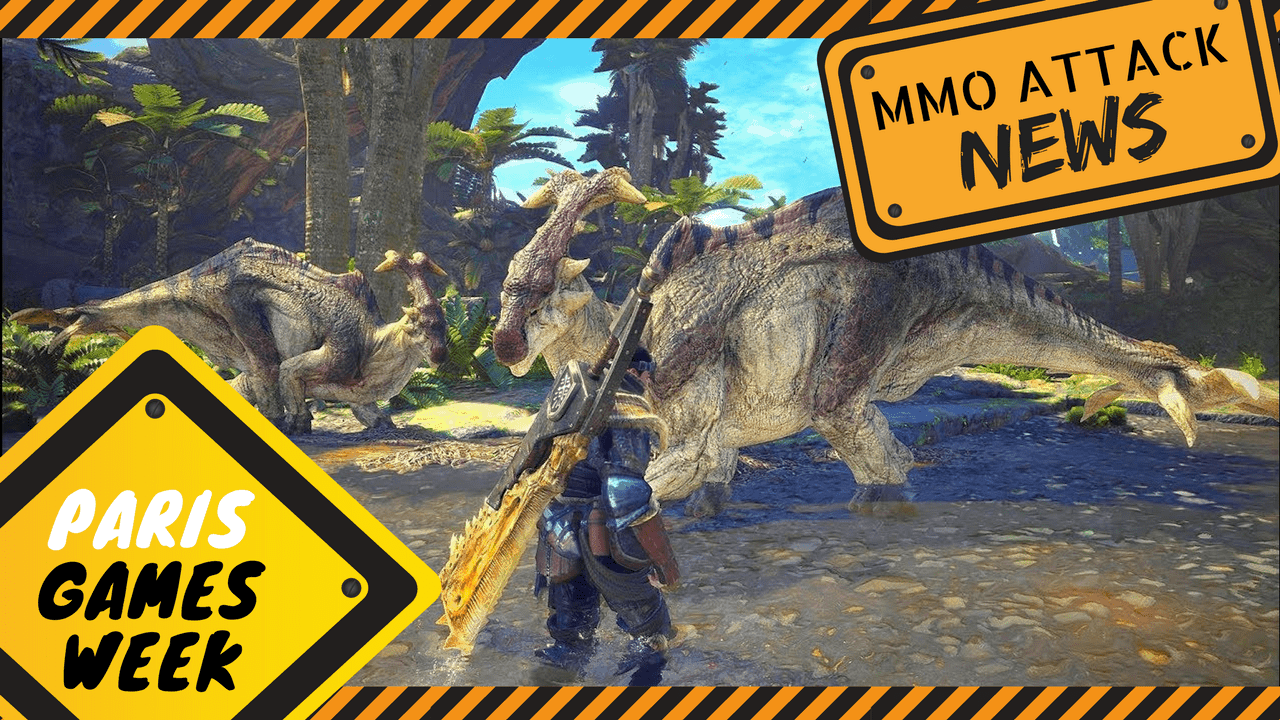 The world is ablaze with hype after Sony’s latest conference at Paris Games Week 2017. The higher ups at Playstation succeeded in making our mouths water with anticipation. We go behind the scenes to bring you coverage for this exclusive event. The two and a half hour presentation showed off gorgeous single player games, VR games, and yes….lots of MMO news as well! Be sure to look out for our in-depth coverage of a VR MMO League Of War! The Monster Hunter Series finally puts on some big boy/girl pants with it’s latest upcoming iteration, Monster Hunter: World (slated for release on January 26th, 2018). After seven years of being a Nintendo-exclusive (at least, in the United States) IPO, the series will at last come to the PS4, XBONE, and PC platforms. If you’ve ever played Monster Hunter, you’ll know it’s an acquired taste. You take your time tracking down huge creatures in the wild, then engage in long battles as you slowly wear down your target. It’s a franchise that has been known to give players tons of cool gear and options, but oftentimes at the expense of losing players with this complexity. It’s a formula that has been a huge success in Japan, but has only attained niche popularity in the United States. As someone that has tried it, I will say that it is dense. This might be the high fructose corn syrup talking but let’s face it; there are some days you just can’t read another paragraph explaining a game mechanic. Be warned, though. Mashing through a Monster Hunter tutorial will cost you dearly.

Monster Hunter: World has a special open beta event for Playstation Plus members from December 9th-12th (be sure to check back here for coverage). It’ll give the developers over at Capcom a chance to tighten the netcode and make any balance tweaks that may be necessary. Another big announcement was the exclusive content Playstation 4 players will be getting with their copy. PS+ members will be able to hunt down giant beasts as someone very experienced in that field, Aloy from Horizon Zero Dawn. To me, it’s more of a symbolically cool DLC than it is a “wow I want to play that” DLC. But to me, it’s one of the cool parts of gaming; a really fleshed out character making an out-of-nowhere appearance in a series that, in a lot of ways, is mainly for Japan. This cameo is bordering on “Spiderman in Tony Hawk Pro Skater 2” territory; perhaps even “Solid Snake in Super Smash Bros. Brawl”. “No metal on the exterior, huh? Easiest…. Gig… Ever” ~ Aloy in Monster Hunter World

The conference also had an announcement for the first expansion of Destiny 2. If you’re like most people who devoted all of September 2017 to it, you beat the single player, played the multiplayer for a while, got some nice gear [maybe even a new ship], and then called it quits. I remember right after beating the main story and not playing for awhile, I got this email from Bungie saying “Please come back! There’s more to do!!!”. I had to reply and be all “Sorry Bungie. It’s time we said goodbye.” My rationale was that the only thing left for me to do in Destiny 2 is try to ascend to the highest ranks of the ladder, but that is just not my jam. But there’s a new DLC announced. The crowd hushes as the trailer starts. This outfit just screams “you don’t even know, bro”

An massive army assembling on Mercury intent on “reshaping the universe in their image” (perhaps they should “chill out” to some Willie Nelson). The expansion is revolved around a legendary Guardian, Osiris; a once great ally that was outcast for his beliefs. He has gorgeous armor that I can only hope is attainable. The trailer shows him in some heavy action mowing down baddies very capably. It was a quality display filled with hype that left the room curious about the new ally and optimistic for a promising continuation of the story. Ultimately this all amounts to 10 or so co-op missions and a couple of maps. So at a price point of $34.99, you do get enough bang for your buck. The expansion is due to release on December 5th.