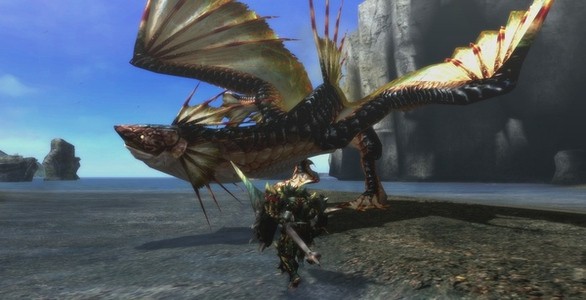 Monster Hunter 3 Ultimate launched last month and has been met with critical acclaim. Both veteran players and new hunters have said it’s one of the best games they’ve ever played but there’s a little more to it than just a great console title.

Now the Wii U didn’t have the best start in console launch history but since the launch of Capcom’s latest title the Wii U has seen a 300% increase in sales in France and an impressive 115% increase in the UK. Even then, it could have been a lot higher as Nintendo have since apologized for the lack of Monster Hunter 3 Ultimate copies, and I personally know people that have avoided buying a Wii U because Monster Hunter isn’t available in local stores.

Although not really an MMO by typical definition as the game only supports 4 players online, but you can meet hundreds of players in the towns and NPC areas. Since I picked up the game I’ve had a crack at the online feature a few times and although I got my ass handed to me on a plate of fire, the potential for a game of this kind is almost limitless.

The PC MMO world has always been restricted due to the huge variety of rigs people use. We’ve never really been given a truly fluid combat system and even the action MMO games seem a little lackluster when compared to console titles of a similar genre.

But what do you think? Monster Hunter 3 Ultimate has proven that even a reboot of a game can become a system seller and many put this down to the exciting multiplayer, a feature that defines the MMO world.