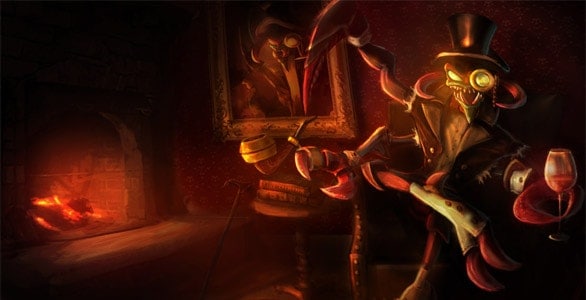 As a League of Legends player, I consider myself average, at
best. Sure, I enjoy the game, and I can pull off some pretty sweet plays here
and there ? but I?m not anywhere near ready to try my hand in a ranked queue,
nor would I last terribly long in the competitive circuit. Believe it or not,
I?ve improved ? I used to be pretty terrible. There were a great many factors I
simply didn?t think about ? elements of the game that more or less escaped me
altogether.

My roommate is an entirely different story ? and I?ve not
a doubt in my mind that living with him and playing league on a regular basis
with him has upped my game. I?ve started thinking of all the things I?ve done
wrong in the past. I?ve started considering where I?m going wrong, and how I
can fix that. I?ve started thinking about how to improve. I hardly consider
myself an expert on the subject, but here are a few of the things I?ve
discovered go a very long way towards being a better player.

An old adage applies here:  If
you don?t have anything nice to say, then don?t say anything at all.

I don?t care how terrible your support is. I don?t care how
thoroughly top-lane lost, or how much the guy who went mid fed his opponent.
Furthermore, there?s a good chance it isn?t the jungler?s fault you died ? it?s
probably yours.

Demeaning your teammates is, hands down, one of the worst things you can do in a game of
league. As a matter of fact it makes you more likely to lose. Think about it –
if somebody?s having a terrible game, and someone acts like a complete jackass
to them, it turns into a vicious cycle. They stop caring as much about the
game. They get angry, or hurt, or simply shut down. In the worst case, they
actively try to get even further under your skin, sealing your defeat. Sure,
it?s frustrating ? but how is screaming at them like a baboon going to get you
anywhere?

One more thing ? if you?re trashing your teammates, you
aren?t playing. You?re distracted. Chances are pretty good the other team is
suffering from no such handicap.

Riot?s presented their
players with a huge roster of champions to choose from ? over one hundred
different characters, each with their own unique mechanics and play-style. That?s
a staggering number, and chances are pretty good that there?s at least one
champion in amongst the horde that?ll simply ?click? with you. You?ll know them
when you find them. For my roommate, it was Tristana. For myself, it was
Singed. Be willing to try every champion at least once. Who knows? You might
end up finding a perfect fit.

Once you?ve found the champion with which you?ve the most
synergy, it?s time to start practicing ? but more on that in a moment.

This seems to be
one of the biggest stumbling points for many players ? admitting that maybe
they aren?t as good at League as they think, and that they could probably learn
a few things from their opponents. I know I had trouble with it, at first.

Essentially: always be willing to learn. No one knows
everything about the game, and no one is perfect at it. Particularly at lower
levels, be willing to consider that a strategy or build you find completely
idiotic and absurd might actually be viable. More than anything, you should
always be looking for a way to improve your own game. Figure out who the major
players are in the competitive scene, and find one who plays your champion.
Once you?ve done so, watch them ? most of them will have livestreams of their
games. Look at what they do, how they build, and how they play. Watch replays
of your own games, too. Look at where you went wrong, and consider the areas in
which you can improve. Finally, if someone gives advice to you, consider it
?even if you think it?s bad.

There are
plenty of champion builds around on websites like Mobafire and Leaguecraft. You
should be looking at them, but you shouldn?t be following them like they?re
gospel. The thing about League of Legends is that it?s an active game. Yes, you should have a few core items on each champion
that you?ll want to rush right away, but at the same time, you need to adapt
your build to a wide array of things ? how well you?re doing, how well your
team is doing, the strongest champion on the opposing team, the composition of
the opposing team?we?re looping back around to critical thinking.

Knowing
the mechanics and techniques associated with each individual champion is great,
sure ? but all that knowledge is useless if you haven?t mastered the basic
technical skills of League. Last hitting minions, knowing when to purchase
wards and where they need to go, and thinking of the big picture whenever you
make a play are some of the most vital, basic skills in the game ? yet so many
people fail to take them into account. I?ve seen plenty of players who are
absolutely brilliant at understanding their champion, yet they?ve the map
awareness of a tree slug ? which means that they?re never where they need to
be, and often where they shouldn?t.

This
guide should get you on the right track. Read it, and remember: practice
makes perfect. Teach yourself how to last hit, and actively consider the rest
of your team. Your lane isn?t the only one in the game (unless you?re playing
an ARAM).

Yeah, you want to get better at League. You want to be a top-notch
player, you want to be that guy who carries your team to victory every game,
the support your team can?t go without, that gold-plated, 2000 ELO
professional. At the end of the day, though; you need to remember that League
of Legends is still just a game. It?s something you do for fun. Remember that
?and try to keep a cool head as a result.