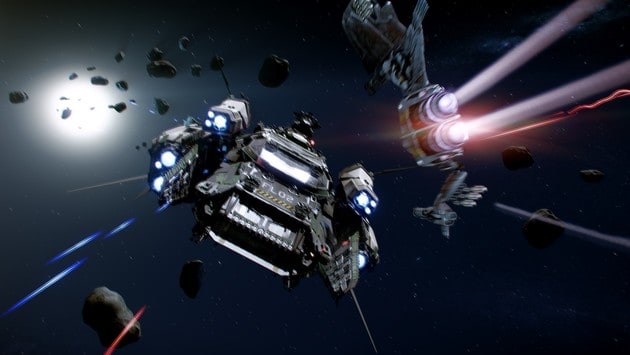 September 2013, a date that will forever be remembered as the start of one of the greatest journeys a game has ever experienced and that journey continues following the latest Letter from the Chairman for Star Citizen. Towards the end of last year Star Citizen and Robert Space Industries were celebrating the impressive $2.1 Kickstarter funding following their mere $500,000 goal. Only a month later they announced a massive $7 million increase in their funding pool and over the weekend they celebrated yet another incredibly impressive milestone.

The new Letter from the Chairman celebrates reaching the latest stretch goal at $39 million, such a massive leap in such a short time. So what’s the stretch goal reward for reaching such a lofty sum? The addition of a user-chosen star system that was voted

UDS-2943-01-22 System – Breaking news: UEE
astrophysicists based at the famed Klavs observatory station have
utilized advanced telescopy and other remote sensing technologies to
identify a truly unusual star system on the fringes of known space. The
object, once thought to be a single massive star, is actually a trinary
star consisting of two white dwarfs and an active pulsar orbiting one
another. Because of the complex gravitic factors at work, it is now
believed that a jump point leading to the system likely exists in or
near explored human space. Beyond the bizarre stellar makeup, the
composition of the system is all but unknown. Could planets exist in
this carefully balanced web? What else might have been drawn there? One
thing is certain: the first Citizen to travel to UDS-2943-01-22 will have one hell of a view!

Although it’s pretty exciting to see an entire star system added to the already impressive list of features, it’s the next stretch goal that has everyone talking. The developers have stated on numerous occasions that the funding will not only go towards creating a great game for launch but also towards creating technology that will allow for the implementation of features further down the line. One aspect of this technology is a procedural generation system.

The end goal? To give the developers tools to utilize a technology that will allow for entire planets to be created dynamically, offering an almost infinite array of possibilities when players explore the Star Citizen world. The progress made towards the next funding goal will go towards creating this technology as well as hiring a special “strike team” of developers with expertise and experience with procedural tech in gaming.

For more information on future stretch goals for Star Citizen check out the funding page.