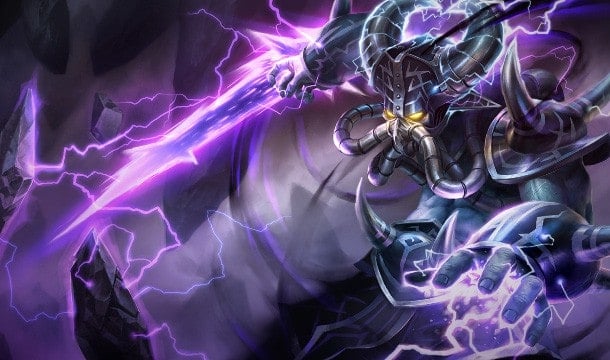 Every season, there seems to be a few “flavor of the month” champions which everyone boldly declares to be overpowered as all hell. “Riot!” they bellow, all fury and vengeance “fix your damned game!” Good luck playing any of these champions in ranked; most games, they’ll be banned before you can pick them. Well…at lower ELOs, anyway.

As such, they generally get banned in ranked with somewhat distressing frequency. Let’s have a look at a few of the most hated characters in season 4, and see if we can’t shed a bit of light on why they’re such common bans. Note that all values are rounded up, and ban statistics are taken from Lolking.net
[heading]Vi[/heading]

Fist up on our list is Vi, Piltover’s heavy-handed enforcer. It’s actually pretty easy to dismiss her as a flavor-of-the-month champion (she did recently dominate in LCS, after all), but I think that ignores the deeper reasons why she’s able to dominate so consistently. See, Vi probably has some of the best jungle presence in the game right now. Most top champions, if they’re caught by her, are next to incapable of escaping a gank by her post-6, and the nature of her kit (the percent damage on her autoattacks) means she’s able to build to tank yet still dish out tons of damage, giving her the ability to generally win trades against most other bruisers.

Given her incredibly strong engage and the fact that she can effectively remove a carry from a teamfight (albeit temporarily), she’s become a fairly high-priority ban. For the time being, anyway.
[heading]Kha’zix[/heading]

I’d like to chalk up Kha’Zix’s current status as one more victim of the current League of Warmog’s meta, but there’s honestly a bit more to it than that. He’s absolutely terrifying to fight in a one-on-one battle, since the damage on his Q is increased by 45% against an isolated target. What that basically means is that, if you’re not careful with him, he can easily gib you. Oh, and when he evolves it, it does damage based on your missing health, in addition to having halfway decent ratios. Because of this (combined with his resets), a good Kha’Zix is able to jump in, slaughter your carry, and get out before anyone even has a chance to react.

He’s also able to fit both a poke team comp and an all-in comp, meaning he’s a lot more versatile than most other assassins of his caliber. [heading]Elise[/heading]

Elise might seem a puzzling pick at first, until you consider the raw power of her Q. See, the fact that her abilities do damage based on percentage of current (human) and lost (spider) HP means that she can very easily build full tank and still roll her way through an entire team if they’re caught unprepared. So…she gets a place on this list for reasons quite similar to Vi and Kha’zix. This holds true even after the nerfs, though it’s a bit more difficult for her to pull off. Factor in that her kit grants her a nearly unprecedented degree of crowd control and mobility – basically allowing her to at least soft counter virtually every top lane champion in the game – and it’s easy to see why she’s such a high priority ban, particularly at higher ELOs where people actually understand how to play her.

Have I mentioned that the current meta kind of favors high hit points?
[heading]Yasuo[/heading]

Ah, Yasuo. The lone wanderer. The realization of one of the most common anime archetypes into a League of Legends champion. While I’m not exactly a fan of Yasuo’s design or backstory, I do love his mechanics – even though I’ll be the first one to admit he’s a bit ridiculous as a champion. Yasuo’s power stems from a few different sources. The first is his ridiculous passive, which doubles the critical strike chance he receives from items. This effectively means that he’s pretty much the only champion capable of reaching 100% crit chance before late game. That his critical strikes do 10% less damage hardly reduces the sheer power of that passive.

Second, there’s his shield, which is recharged by movement speed. Riot’s nerfed it several times over, and it still lends him an unexpected degree of tankiness, allowing him to escape from situations where he has no business being in the first place. Your mileage may vary on this one.

Third – and this is the reason I myself maintain he’s a bit overpowered – is the positively horrifying amount of synergy he has with other champions by virtue of his ultimate – which can be triggered on any target(s) that are knocked into the air. Unfortunately, Riot has a rather strange definition of what constitutes ‘airborne.’ Here are a few champion abilities which trigger Yasuo’s ultimate – even though you wouldn’t really expect them to:

Seems a little much, right?

I know I’ve said on multiple occasions that Teemo is the most hated champion in League of Legends, but honestly? Kassadin gives him a run for his money. Currently, the Void Walker has reached a nearly 100% ban rate. That is to say…he’s been banned in virtually every draft and ranked game of League that’s been played since season 4 began. There’s no end in sight for this, either – no matter what Riot does to the champion (save making him totally unplayable), they can’t seem to fix him. But why? Just what is it that makes him such a hated foe?

A few things. First and foremost, his ultimate is effectively a free flash with scaling damage per cast and a ridiculously low cooldown (don’t quote me on this, but I think it’s actually got a longer range than flash). His Q is one of the best silences (if not the best) in the game, and a reasonably-farmed Kassadin can easily chunk down virtually anyone who isn’t a tank or bruiser. He’s beatable if you know what you’re doing, sure…but even a minor slip-up could lead to a catastrophic loss against a relatively skilled Kass player.

Better to just ban him and be done with it, particularly at lower ELOs.