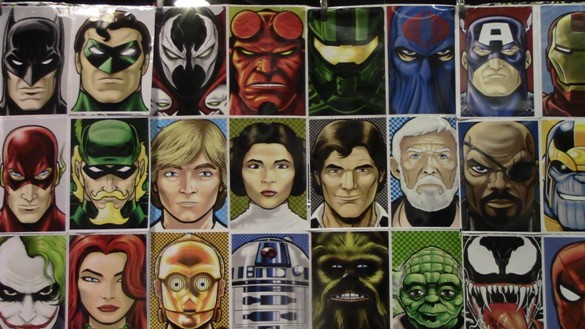 MMO ATK was busy last weekend. Kirk traveled to cover GDC 2013 in San Francisco. Another popular event originating in that area is the anime and comic, geek fest known as WonderCon. After 25 years the event became so popular that the company started to hold two conventions, one in San Francisco and one in Anaheim. With @Atticon40 busy up north, we were lucky enough to have @ReinaScully on scene for WonderCon Anaheim 2013.

Check out some of the great video footage below. We saw amazing cosplay, rare comics, and even some celebrities. Sightings include actor Larry Thomas (The Soup Nazi – ?Seinfeld?), cosplayer Jessica Nigri, Rikki Simons (voice of Gir ? ?Invader Zim?), and the Marvel legend himself: Stan Lee.

Reina is too nerdy for us to keep up with sadly, and we couldn?t be there to get video on the first day she visited. Hopefully these pictures will help though.
[heading]COSPLAY[/heading]Reina had a blast dressed as Chi from Chobits and Chun Li from Street Fighter.

Other people had some awesome costumes of their own.

[heading]GAMING, COMICS, AND ANIME[/heading]Big names like Nintendo and Capcom are always present.

Here’s a vehicle from the upcoming movie Oblivion.

There was tons of great merchandise of course!

What time is it?! Ooooooooh!

[heading] CELEBRITIES [/heading]There were way more familiar faces walking around than we had hoped!
Stan Lee ran away when he noticed our camera hovering around him.

So did Jessica Nigri.

We did got to see Rikki Simons, the voice of Gir!

@FluskenRaider got to meet one of his favorite television characters, The Soup Nazi.

[heading]BONUS VIDEO[/heading]Every geek should attend a comic or cosplay convention at some point in their life. Every experience is unique and the costumes are truly astonishing at times. If you don?t believe me, let?s just say there aren?t many places you can go where you?ll find Link idly waiting to help you serenade a giant spider creature. He saved our nerdy butts. visit to WonderCon 2013 was ultimately a success. Let us know if you plan to attend any future gaming or geek conventions. You can be sure you’ll find Reina Scully and the MMO ATK team at countless others. E3 here we come!
MMO ATK | We Do Games  —  Play Free Today!