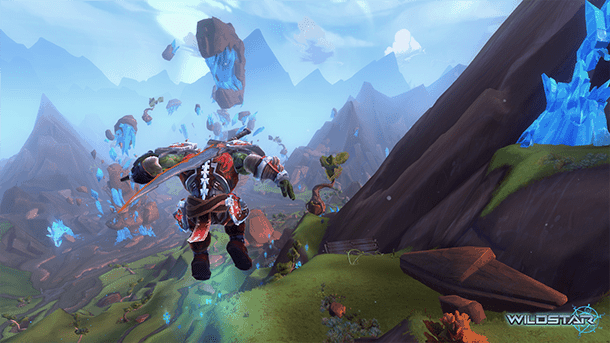 As seen on Todays Daily XP Video!
Carbine Studios is pleased to announce two public events during San Diego Comic Con next week. The events will take place on Friday, June 19. MMO ATK will be there, but this is a chance for fans of online gaming to check out the most anticipated MMO of 2013 before its release.

Carbine will stick with the highly annoying yet rewarding convention trend of hosting a discussion panel. The panel will include Wildstar?s lead designers and directors. MMORPGs tend to have very in depth storylines, and explaining those tales through the internet can be quite tasking, especially with fans being able to jump to any point in a video. Lead Narrative Designer Chad More will help to explain how characters were developed in Wildstar. There will also be discussion about story arc development and how it makes each individual feel like the center of a massive universe. More will be accompanied by Content Director Mike Donatelli, Creative Director Matt Mocarski, and Design Producer Stephen Frost. If there?s anyone that has the answers to the planned future of this ?Wow Killer?, these are the guys to do it.

If you aren?t lucky enough to get into Comic Con for the Friday showing, or just don?t want to wait in line for hours for your first Wildstar experience, don?t worry. Carbine is hosting a second event later in the evening at Hotel Palomar, which is not too far from the convention center. Between 7 and 11 p.m. there will be a Wildstar Fan Event. There attendees will have the chance to play the game firsthand, along with being part of an exclusive group who get to see the game?s two new races early. The event even gives the chance to meet and greet with developers and ask them questions that may have been passed over during the panel.

You can get more information about the events along with their locations from the Wildstar website. This may be a convention surrounded by the world of comics, but it?s obvious how much more involved the world of MMO gaming is starting to become with the whole process. I wonder what else we will see at Comic Con this year.  Maybe we’ll even get some news and info on how we’ll be able to purchase Wildstar in the future.