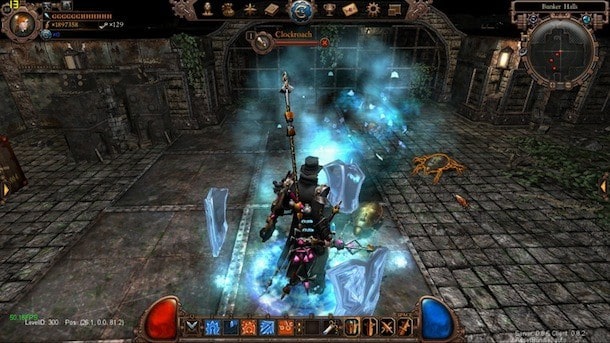 Mechanist Games have just posted a new developer blog article detailing the overwhelmingly large, Colossus. Okay you’re right, the name does imply that it would be something of considerable size but I don’t think anyone was expecting something this colossal.

The Heartlands was never considered to be at the forefront of military technology but the citizens of the 6 City-States have longed enjoyed an era of peace and serenity. Delton, one of the City-States, credits this to the presence of something almighty, the Colossus. Created as a defender for the ancient Paragon race, the Colossus remained dormant for most of its time, waiting for any potential threats to reveal themselves.

This gargantuan automaton could be seen during City of Steam’s closed beta period, stomping around in the foreground battling Songbreaker, a rather ugly individual that took pleasure in setting alight airships with his over-sized fireballs.

Have you ever read those cute little dinosaur books that show pictures of the ancient beasts alongside modern day humans? Well Mechanist Games provided something similar for the Colossus and well; eat this T-Rex.

As you can see from the above image, the Colossus is not something you would want to trifle with. Accompanying its tremendous size are a plethora of powerful weaponry including some rather supreme cannons and a punch to the face that would leave little remaining of Mount Rushmore. For more information on the upcoming steampunk MMORPG game, you can visit the official website

If you want a quick taste of what awaits you when the game releases, check out our video review here

While you’re here, feel free to check out Thomas’ City of Steam Greenlight campaign article. Valve have provided a unique service for MMO fans, giving us the option of overriding paid hype and advertisements, with genuine interest and excitement. I’ve played City of Steam personally and I have never been this excited for a free-to-play MMO title, so show it some love on Steam already.