Eight of The Most Memorable MMO Dungeons Ever Designed

You know, in a lot of ways, the MMO genre draws its inspirations from traditional tabletop gaming. Just look back to the earliest days of D&D, and you’re like as not going to find a whole host of similarities linking this timeless hobby to the traditional MMO framework. One of the clearest indicators of this inspiration is the dungeon crawl. You’ve all experienced it before, and most of you have played enough to understand beyond all shadow of a doubt that no two dungeons are created equal.

There’s a good chance you’ve played through some pretty bad ones, fraught with infuriating challenges, poorly-designed maps and unimaginative encounters. That said, most of you have at least one favorite, too – a dungeon that’s going to stick with you for the rest of your gaming career. The reasons for this are many and varied: perhaps you love the dungeon’s look and feel, or a particular encounter, or simply the way everything’s laid out. Whatever your poison, you’ve encountered at least one that stood a cut above the others.

Today, we’re going to be paying homage to a few of those. These are some of the best, most beautiful, and most creative instances in MMO history. Anyone who’s ever designed a dungeon can learn a great deal from any of them. 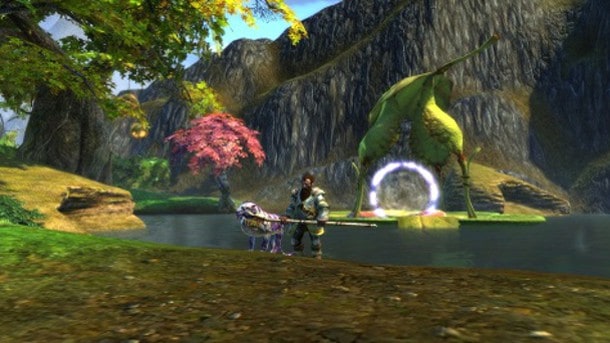 In my mind, Blackwing Lair is still one of the most incredible dungeons Blizzard has ever created. Situated at the top of Blackrock Mountain(itself an epicenter of several instances and raids), Nelfarion’s fortress at the time had some of the best-designed, most challenging boss fights ever seen in World of Warcraft. Truth be told, it still does – though those fights have fallen far by the wayside as Blizzard has pumped out new endgame content and dragged the level cap (and gear quality) ever higher. Tactical encounters aside. the dungeon also boasts a rather fantastic, sinister aesthetic, which – while not as downright dazzling as some of the others on this list – nevertheless has entrenched it firmly in the minds and hearts of WoW veterans.

Another personal favorite of mine is the dread tower of Karazhan. This sprawling, non-linear instance is still one of the most immersive and atmospheric I’ve ever experienced, owing both to the fantastic soundtrack and awesome graphic design. The learning curve was perfectly set up, and the events (and bosses) were both challenging and diverse.  As an added bonus, for anyone ballsy enough to glitch underneath the dungeon, it’s also home to one of the most terrifying areas in World of Warcraft.

Alright. Let’s step away from World of Warcraft for a while. Even though there are more positively fantastic dungeons in that game, we’ve still got to give other MMOs their fair shake. This next one comes from Star Wars: The Old Republic, and is memorable enough for narrative reasons alone. Watch out, folks: here there be spoilers.

The Maelstrom might well be one of the least hospitable areas in space; a huge cloud of charged space dust and raw energy which makes traditional navigation next to impossible. For this reason, the Sith Empire decided to hide within it one of their most dangerous, most legendary prisoners: the redeemed Sith lord Revan; protagonist of the first Knights of the Old Republic. It’s difficult to describe the feeling one gets when, after defeating an antagonist who has dogged their steps for countless levels, they find themselves standing face to face with a living legend. If you play SWTOR, this is something you definitely have to experience for yourself.

Our next entry on the list, hailing from EverQuest, is home to the vampire followers of Lord Mayong Mistmoore. It’s also one of the most eye-poppingly beautiful zones in the game. Not only that, it features an entertaining, creative, and engaging layout; filled with false walls and hidden passages. It was one of the best of its time, and stands up to scrutiny even today.

Offering up equal parts narrative scale and aesthetic appeal, Elendil’s tomb stands out as one of the most memorable dungeons in Lord of the Rings Online. What’s more, though much of the dungeon is a fairly simple run –  giving you time to admire the scenery, of course – the bosses are anything but. Nornagol, in particular, is probably one of the most challenging encounters you’ll have dealt with up to this point, while Mordambor is anything but a pushover.

Anyone who’s played through this dungeon won’t dispute its spot on the list. The City of Arah represents the final encounter in the storyline of Guild Wars 2 (for the moment, anyway). The endless hordes of undead threaten to overrun the rest of the world. You are the only force that can fight them; should your desperate last stand on the island of Orr fail, all is lost. The cleansing of Orr is incredible, by the way, and the final boss – while not terribly challenging – is nothing if not memorable.

Imagine, for a moment, that you’re a pretty big-shot villain in a city filled with superheroes (many of them played by players). Now imagine further that you’ve the chance to travel to the Justice League Headquarters, clean their clocks, and leave the whole place as a mound of flaming rubble. That includes beating the living crap out of Superman, who may be one of the most irritating superheroes in history. Now, from that, I’m certain it’s plain to see why The Watch Tower is probably hands down the best instance in DC Universe Online, no?

Welp. That concludes this list. What do you folks think? Any favorites of your own to add? Gimme a shout in the comments!

Eight of The Most Memorable MMO Dungeons Ever Designed