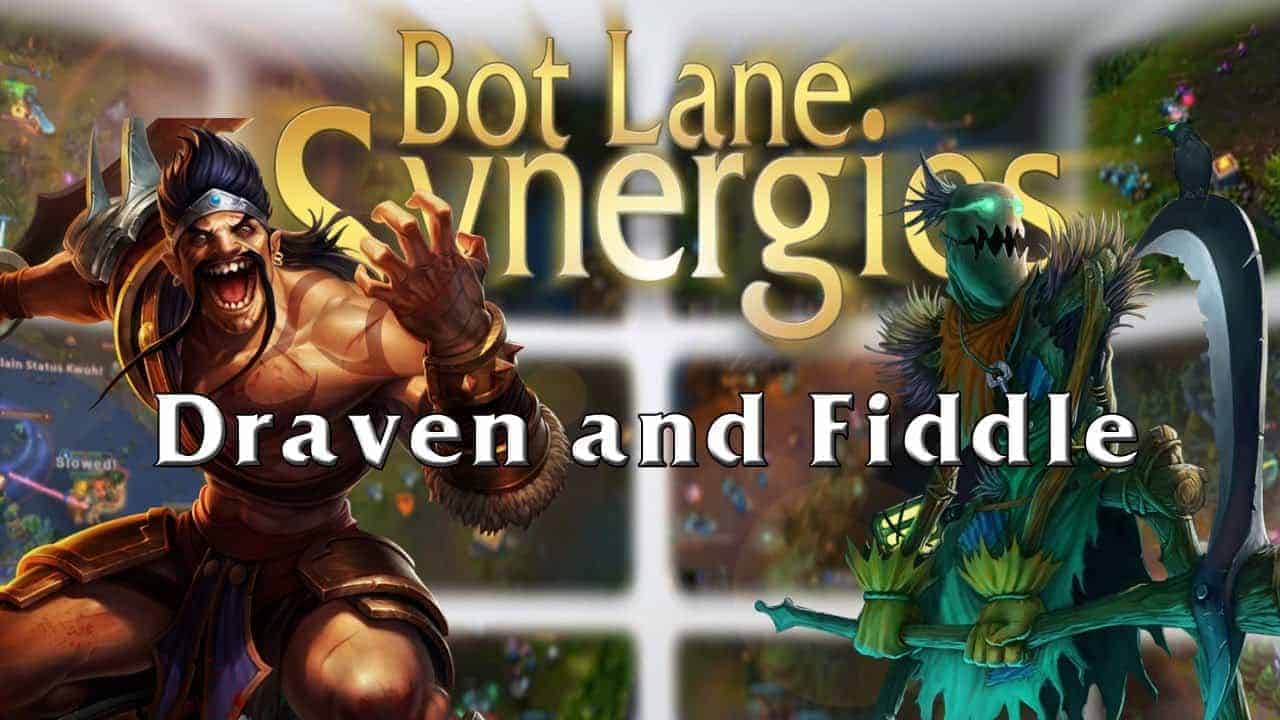 Bottom Lane Synergies between your Support and AD Carry can help get your team off to a great start.  This week on League of Legends Bot lane Synergies we take a look at Draven and Fiddle.
Find more Bot Lane Synergies in our series page.
[play-now-gold=http://traktum.com/?a=63495&c=114486&s1]Play League of Legends[/play-now-gold]
Get caught up on the latest in MMO and MMORPG news from our writers and reviewers.
Looking for a new free to play game? Play the Top Free MMO Games as chosen by us here at MMO ATK.
Transcript:
Heyoo summoners, TJ
and Ashley here with Draven and Fiddles bot lane synergy.
Today we will be taking a look at this deadly duo bring fear into their
enemy’s eyes.  Dravennnnn, this high
damage ADC has a very limited mobility kit who uses his attack speed and
movement speed steroid to move through battle dealing massive amounts of damage
with his spinning axes.  Fiddlesticks the
scarecrow of doom brings high amounts of damage and a 2.25 second fear at max
ranks. At level 6 he is able to split a team in half with his ultimate causing
mass chaos and allowing Draven to pick off split targets.
Together fiddle and Draven have very strong early game control, with fiddles fear and Draven’s axes they have high kill potential at level
2.  With proper positioning fiddle is
able to use his dark wind to bounce back and forth on the enemy laner while Draven picks up the kills gaining bonus gold
from  his adoration stacks snowballing him into late game.  Let’s go ahead and take a look at a few
examples of this charming but deadly duo.

Here we have Draven picking a fight with graves Leona as
trundle is running away with fatal health, fiddle comes to assist his lane
partner while Draven dodges Leona’s zenith blade and runs into the bush to cast
his ult. With Fiddles fear he is able to land his ult twice sending graves to
his grave? And gaining bonus gold from his passive.

Trundle and fiddle see
Kat coming down to assist her team, fiddle positions himself to ult on top of
her with Draven on his way, fiddle fears Kat allowing for Draven to pick up a
kill. Graves comes by and launches his ultimate to hopefully kill fiddle, Draven
blocks the ult and guess what happens next? HE LIVES!

Draven and fiddle are
running towards trundle and Darius to assist them with the enemy team. Fiddle
ults into the team fight causing them to scatter while Draven follows up onto
the split Irelia and Katarina picking them off. Leaona casts solar flare
stunning fiddle and brining Draven to low hp. she is quickly chunked down with
3 low hp allies graves buck shots Draven to pop his guardian angel, but fiddle
then fears him allowing them to take down his guardian angel in return. Draven
positions himself to dodge graves burst and picks up the kill ending them game.

With trundle on his
way Draven positions himself to get caught by Leona, she instantly regrets her
decision as trundle appears. fiddle then fears Leoana and silences as she tries
to escape, she cast solar flare onto trundle but Draven is still able to take
her down collecting bonus gold

Fiddle Positions
himself to ult onto the opposing team causing them to split. Katarina zhonyas
as Irelia comes to her aid. Katarina gets taken down as Irelia hunts down Draven.
Leona ults onto trundle and Irelia switches targets. Trundle Flashes and leaves
a pillar to distance himself from Irelia as Draven does massive damage to her
saving his teammate.

What did you think of
this deadly combo? Go ahead and leave us your thoughts in the comments below
and tell us what bot lane combos you would like to see.  Also make sure to tune in next time where we
go over Lucian and Karma bot lane, and feel free to submit to us your bot lane
duo videos at our website mmoatk.com
If you liked this video go ahead and give us a like share and or
subscribe and we will see you next time on league of legends bot lane
synergies!