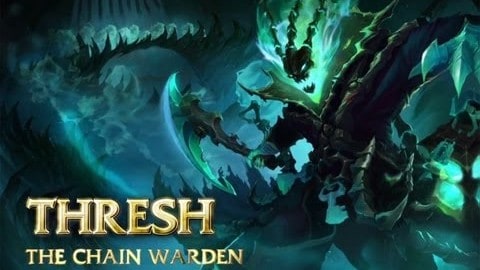 Riot Games and League of Legends has unveiled their first new champion in their hit MOBA game for the year.  His name?  Thresh the Chain Warden.  Thresh the Chain Warden is a short ranged beefy support champion who excels at manipulating the position of himself his enemies and his allies.  Thresh can bring in an ally from far away, save them from peril or dive into the action himself.

Take a look at the Champion Spotlight below to get a better look at all of his skills and abilities.  Right off the bat it looks like he would be a rather fun champion to play.  His Dark Passage ability, which is his signature move, can be used in many different fashions, which intrigues me right away.  Below the Champion Spotlight video i’ve written down his abilities and what they do.  Now’s your time to shine!

[heading]Passive:[/heading]Damnation: Unlike other champions he does not gain armor per level, however, when near bye enemies die, they drop souls which he can pick up to gain armor and ability power.

[heading]Abilities:[/heading]Death Sentence: Has a passive and an active effect, passively death sentence causes his attacks to deal bonus damage based on the number of souls harvested, based on his attack damage and how many souls he has harvested.  When activated, Thresh throw out his scythe damaging and pulling in the first enemy it hits, after hitting an enemy he may re-activate death sentence to pull himself to his target.

Dark Passage: Tosses thresh’s lantern, if an ally clicks the lantern Thresh will pull the ally and lantern to himself, any allies that walk near the lantern are granted a damage blocking shield for a few seconds.

Flay: Damages and slows all enemies in a line both in front of and behind Thresh. All enemies struck are also pushed in the direction in which Thresh cast the ability, he can ever push them away, or towards himself.

[heading]Ultimate:[/heading] The Box: When cast Thresh crates a prism of spectral walls around himself, any enemies that walk through a wall are damaged and heavily slowed but break that specific wall in the process.