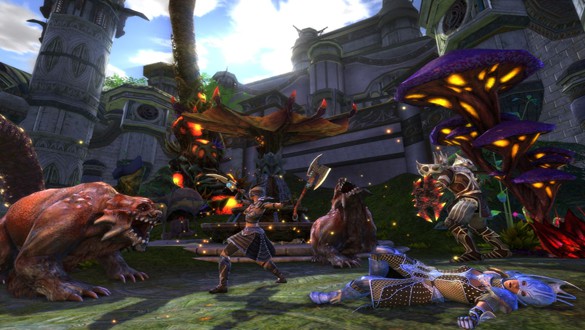 The video game industry is constantly innovating the way player’s experience MMO gaming. Some games have achieved enough reputation to warrant monthly subscription fees, while many increase in popularity after joining the free-to-play race. Regardless what MMORPG tickles your fancy, it probably has undergone many changes through additional content known as expansion packs.

Some expansions merely add bonus content, but many make changes to gaming mechanics and add increased leveling capabilities. With a majority of MMORPGs releasing additional content at one point or another, there’s a horde of expansion packs that have inspired an invigorating passion toward online gaming. With no pun intended, here are 10 of the most game-changing MMORPG expansion packs ever released.

Dungeons and Dragons Online was a decent game during its early years, but it really takes off utilizing the Menace of the Underdark expansion module. With the new expansion came Epic Destinies; a way for players to experience improvements and journeys five levels higher than the usual cap of twenty. Along with a handful of adventure packs that include brand new locations, players are granted extra points to purchase additional pets, spells, and quests. Lastly, where would the famed franchise without the Druid class? Menace of the Underdark makes the list because it finally added the essential Dungeons and Dragons class the game had been always missing.
[play-now=http://traktum.com/?a=63495&c=145126&s1]Play Dungeons and Dragons Online[/play-now]
[heading]9. Sentinels Fate (Everquest 2)[/heading]

The sixth expansion in the Everquest 2 lineup brought quite an influx of content. Sentinels Fate was like Christmas Day for most Everquest 2 fans. As if the addition of over 2000 items wasn’t enough of a gift, players can find joy undertaking up to 400 new quests while fighting, and probably running from, hundreds of newly added monsters. Throw in over ten new dungeons and an increased level cap from 80 to 90 and you get an explosion of content that most MMO games would never dream of coming close to.
[play-now=https://www.everquest2.com/free]Play Everquest II[/play-now]
[heading]8. Rise of Zilart (Final Fantasy XI)[/heading]

American players were lucky to be given Rise of Zilart with the national release of Final Fantasy XI, so they have no idea what they might have missed out on if given the chance to start when the game originally launched. In fact, this expansion is easily the reason the game finally made it to the states. Rise of Zilart incorporated beasts known as hyper notorious monsters; now a staple in Final Fantasy online group experiences. New missions helped improve endgame goals for already dedicated Japanese players while providing three essential classes: the Ninja, Dragoon, and Summoner. Many classes have been added to FFXI over the years, but none quite as utilized as the Ninja (dual wield ability) and Summoner (mana boosts). New zones, an increased level cap, and an improved soundtrack helped propel Final Fantasy XI to the top of the MMORPG food chain, where it’s fan base is still strong.
[play-now=http://www.playonline.com/ff11us/index.shtml]Play Final Fantasy XI[/play-now]
[heading]7. Riders of Rohan (Lord of the Rings Online)[/heading]

It might be difficult allowing such recent release to be regarded so highly, but Riders of Rohan has succeeded at improving what is already one of the most popular MMORPGs in the gaming industry. Characters can now advance to level 85 and take part in an extremely innovative combat system utilizing mounts. Players are granted the ability to obtain a War-steed and progress learning skills that are exclusive to their class and the game’s new mounted combat. Now you and your friends can take down the entire cavalry of Warbands and truly experience the horse backed mayhem portrayed in the famous Lord of the Rings stories.
[play-now=http://traktum.com/?a=63495&c=150245&s1=]Play Lord of the Rings Online[/play-now]
[heading]6. Scars of Velious (Everquest)[/heading]

When a game has had nineteen expansions in its lifetime, developers have clearly been doing something right. With never ending content being added to the series, choosing just one expansion over the rest seems almost impossible. Over the years though, Everquest fans have spoken loud and clear, coming to an agreement that Scars of Velious can’t be beaten. A new sect of dragons may not seem like much, but when it comes to MMORPGs, sometimes you just can’t beat huge dungeon adventures full of intense dragon battles. The expansion also finally introduced Giants and Dwarves to the huge fantasy universe. With many new locations supporting an influx of raid possibilities, Scars of Velious gave the MMO gaming community a fresh experience that was unparalleled during the time of its release.
[play-now=http://traktum.com/?a=63495&c=159882&s1=]Play Everquest[/play-now]
[heading]5. Mists of Pandaria (WoW)[/heading]

Just because people keep making fun of the furry pandas, doesn?t mean this isn?t one great expansion. Although Mist of Pandaria started slower than other expansions, it has since been regarded a success among World of Warcraft fans. The new Pandaren race and Monk class were enough to drag new gamers to the MMO world, and it obviously brought back a large number of previously bored fans. With an obvious increase in the games max level, a new turn-based pet combat system, and challenge modes that put even the most hardcore gamers to the test; there are more than just a handful of experiences for any World of Warcraft player to enjoy.
[play-now=https://us.battle.net/account/creation/wow/signup/]Play World of Warcraft[/play-now]
[heading]4. Mines of Moria (Lord of the Rings Online)[/heading]

The first expansion of the Lord of the Rings Online is one of the best. Years before mounted combat was making its way into the Lord of the Rings universe, players were lucky enough to be granted two new classes and a list of new experiences from fabled environments of Moria. The biggest addition in the expansion could be the inclusion of legendary weapons. That being said, developers at Turbine promised some of the greatest environments any MMORPG could offer and they certainly delivered. Years later, new and returning players alike are experiencing these wondrous locations, along with some of the unique items found in them. Like every other expansion on this list, a level cap was raised. What solidified this as a great expansion was the new and improved way creatures utilize their surroundings to their advantage. Part of the brilliant detail in Mines of Moria was creating an interactive environment of enemies that’s not mirrored in any other MMORPG.
[play-now=http://traktum.com/?a=63495&c=150245&s1=]Play Lord of the Rings Online[/play-now]
[heading]3. Storm Legion (RIFT)[/heading]

Expansions usually focus on bringing bonuses to already loved video games. Other times expansions change the future of the MMORPG you are playing entirely. What was deemed the best expansion of 2012 by multiple game websites has clearly lived up to its hype. New gameplay mechanics and an endless list of content truly brought RIFT to the next level. Beside the two humungous continents giving players tons of new environments to explore, there are a slew of options for leveling including onslaughts and of course ? rifts. Not satisfied yet because you already reached end game? An increased level cap and four new souls may change your mind. Ranging from the small revisions like a slot for wearing capes, to large improvements like grandmaster crafting professions, Storm Legion has certainly brought RIFT to the next level of MMORPG gaming.
[play-now=http://www.riftgame.com/en/products/]Play RIFT[/play-now]
[heading]2. Wrath of the Lich King (World of Warcraft)[/heading]

Let’s face it; whether you like it or not the biggest name in MMO gaming is World of Warcraft. We already covered the impact of the game’s most recent expansion, Mists of Pandaria. Trace the title’s lineage back five years and you have arguably the greatest MMORPG improvement ever achieved. When Wrath of the Lich King came out, WoW was at the peak of its popularity and already had a myriad of qualities keeping gamers hooked. An increased level cap would have been enough to milk sales for Blizzard. Proven quality aside, this expansion went above and beyond by changing the way people viewed MMORPGs.

Realistic shadows, new element graphics, and a adjustable character resolution delivered some of the most breathtaking new environments. More importantly, it opened the players eyes to the abundance of already fantastic game experiences that have been just a stone’s throw away. Wrath of the Lich King made players feel like they were truly involved in of the World of Warcraft universe, something MMORPG expansions continue to struggle with. Looking back, players don’t regard the second addition to Azeroth as a game changing experience. Instead they refer to it as a life changing one.
[play-now=https://us.battle.net/account/creation/wow/signup/]Play World of Warcraft[/play-now]
[heading]1. Retribution (EVE Online)[/heading]

The newest of many expansions for EVE Online has easily brought the most mind-blowing changes in the games popular history. The most notable of changes in Retribution was the rebalancing of the game’s vehicles (frigates, cruisers, destroyers). As if the sweeping improvements to mechanics weren’t enough, developers also reworked the games Crimewatch. The innovation of a system that tracks a player’s criminal status was integral to the newly implemented bounty hunting system. The expansion obviously brought its own slew of interactive content; including new destroyers, an ORE frigate for mining, and audio and tactical combat features that severely improve the MMORPGs level of immersion.

The most magnetic addition in the Retribution expansion pack comes from the ground breaking integration of Dust-514, a free-to-play first-person shooter that takes place in the EVE universe. For the first time in gaming, the outcomes of one game would have direct effect over experiences in another. What players do as mercenaries battling for planetary control in Dust-514, fully affects the political and economic status of the experiences in EVE Online. Covering thousands of maps over a breathtaking universe of planets makes Retribution an unbeatable MMORPG expansion.
[play-now=http://www.eveonline.com/retribution/]Play EVE Online[/play-now]
Were there any great expansions left off the list? Let us know below and don’t forget to check out some other great MMO experiences.