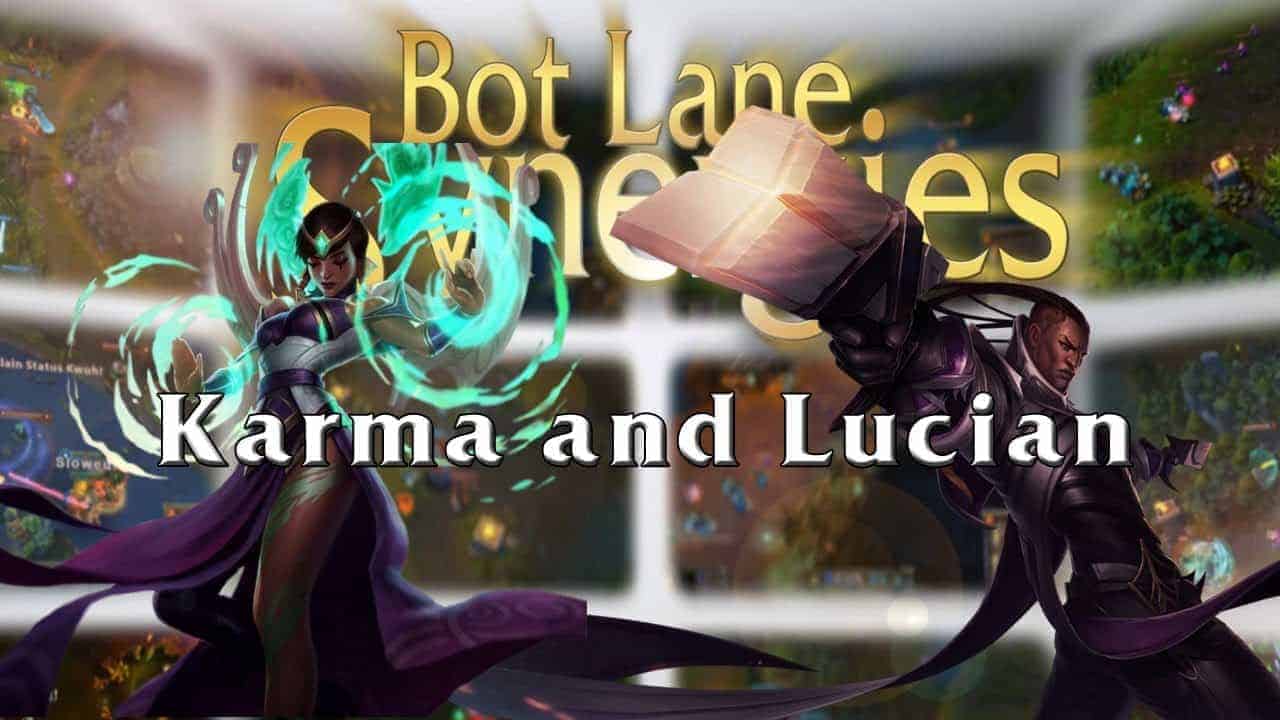 Bottom Lane Synergies between your Support and AD Carry can help get your team off to a great start.  This week on League of Legends Bot lane Synergies we take a look at Karma and Lucian.

Ello summoners, Ashley
and TJ here, and Welcome to League of Legends Bot Lane Synergies.  Ashley,
why don’t you tell them what Bot Lane Synergies is all about.  In this show we take two champions who we
think go extremely well together and break down exactly why that is.  This week we have some footage we captured of
karma and Lucian. BARLEY! What did you guys think of all the server problems
this past week?  It definitely made our
life harder, trying to collect footage for this week. RIOT PLS! Anyways. Lucian
the purifier, is a poke heavy ADC who can remove slows with is dash and gain
bonus movement speed from his W procs.  Karma,
the enlightened one, is equipped with a high damage poke, and tons of utility
for her team.  But .. you already knew that!  Lucian and Karma are able to poke down
targets with their Q’s giving them very strong early game control and zone
potential.  Yeah talk about scary! What’s
even better is that Karma has the ability to disengage herself and Lucian AFTER
unleashing their full combo.  I definitely
can recall a bunch of times you saved me with that amazing shield. Bonus movement
speed on an already fast ADC? That will make him run faster than Usain bolt!  Woah there lets slow down a bit and take a
look at a few of these plays or runs! In action.

Here we have Karma and
Lucian engaging onto fiddle sticks as Gragas arrives. Fiddle flashes to dodge
gragy boys body slam, but Lucian flashes to secure the kill. They switch onto
jinx but she flashes, We didn’t want to mess with crazy lady anyway.

Lucian and karma are
fleeing away to their tower as they see Xin Zhao arrive to gank. Lucian times a
dash to bring Xin to his tower bringing him to low HP. Lux lands a double bind
ult combo As Lucian and karma switch focus to twitch. Lucian uses the culling
to bring them low and get the kill on Xin.

Here they see the
trickster Leblanc coming for a gank. karma Q Tethers Leblanc forcing her to
flee as Farvan arrives. as karma gets chained Lucian casts the culling while
karma uses a mantra Q on their whole team devastating their LIVES. They switch
onto thresh and get him to flash but as the chase continues thresh hooks onto
the wight camp and escapes. NOT!

Karma and Lucian begin
to head back to lane, while karma decides to fight as soon as the enemy arrives.
Lucian sits back waiting for the right moment to enter While his friend soaks
up most of the enemies spells. As Lucian fully engages he pokes down the enemy
team while karma sits in the back speeding him up allowing him to stick to his
targets. Lucian gets feared as karma goes in for the kill on jinx, but a crow
and tower hit sends her back. She then casts a mantra q killing fiddle while Lucian
sacrifices himself for jinx.

Here we see Lucian and
Karma attempting to engage on the enemy jinx, Lee sin shows up for a surprise
gank causing them to flee. As lee sin dashes in, karma and Lucian kite and poke
them down turning the tide of the gank. Lee Sin Q’s into karma but is hit face
first with a ton of damage brining him down. Nidalee arrives to aid her team
chasing them back to tower with a spear onto fiddle they able to focus down
jinx and switch to the scarecrow.  Lucian culls fiddles sticks on tower
but the fight isn’t over yet. A NEW CHALLENGER APPROACHES, Syndra makes her way
down botlane as karma and Lucian push to tower. When Syndra arrives she
attempts to burst down Lucian but a quick barrier and karma shield will keep
him alive. Nidalee comes back into the fight and DEAD.

Karma and Lucian push their
way to mid tower poking vi down. They then turn onto the tower bringing it
down. Vi begins to charge up vault breaker to what looks like an attempt to
flee but she quickly turns around as her team arrives. They are able to bring vi
down before they rest of her team comes but they are now surrounded karma runs
off to the side poking him down while Lucian kites. They bring down kenen and Lucian
pops barrier to continue fighting. Leblanc soon arrives bringing Lucian down to
EXTREMLY LOW HP, shields speed ups and dashes are able to keep him alive just barely to take
out Ezreal and Leblanc. unfortunately thresh arrives killing Lucian reuniting
him with his wife. Jarvan then avenges his fallen ally ulting onto of thresh
for Demacia ending in a 4 for 1 trade.

What did you think of
this exotic bot lane 😉 Go ahead and leave us your comments below regarding the
video or even all that server lag.  And
feel free to give us a like share and or subscribe and we will see you next week
when we take a look at the wombo combo bot lane Ezreal Lux. Who needs a map
when you have a walking flashlight named Lux Double rainbow? what does that
mean?! Anyways we will see you next time summonses!

Find more Bot Lane Synergies in our series page.
[play-now-gold=http://traktum.com/?a=63495&c=114486&s1=]League of Legends[/play-now-gold]
Get caught up on the latest in MMO and MMORPG news from our writers and reviewers.
Looking for a new free to play game? Play the Top Free MMO Games as chosen by us here at MMO ATK.
Get Social With Us:
MMO ATK on Facebook:
MMO ATK on Twitter: