I’ve been playing a lot of Dark Souls II lately – and you should be too. Say what you will about the game’s flaws, it’s still arguably one of the best action RPGs released in the past several years. If you’re up for a bit of a challenge, it’s well worth the buy. Don’t believe me? Let’s talk, then.

Path of Exile releases new information on what to expect come launch day later this month.

A 5th server is set to be released this Wednesday for the MMO action RPG, Odin Quest. 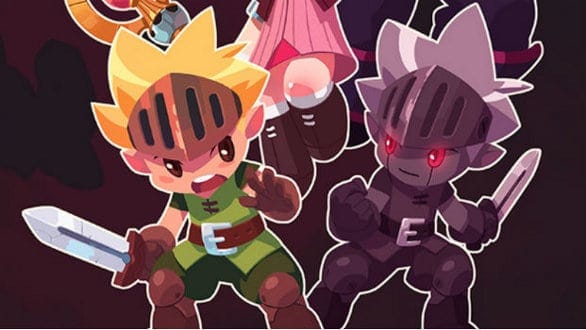 Each week our resident Indie Gamer Nicholas takes a look at a different Indie Game that you may or may not have heard about. Join him on his adventures as he sifts through the rubbish to find The Indie Game of the Week.

ChronoBlade is a browser based hack and slash side-scroller that’s hosted on Facebook. The game mainly relies on button smashing and killing. The game comes from nWay Games and is their first foray into the genre. Many of the great people working on the game come from some pretty incredible backgrounds in games like Dead Space and Diablo II.

ChronoBlade involves building your character through a skill tree which grands you additional passive and active skills. Currently there are 2 different characters, Aurok, who is more of a bersker type character that uses his hands as weapons, and Lophi, who is more of a DPS character that relies heavily on combos to kill. The game is in beta at the moment and interested players can sign up using the Play Now button above.

Be sure to stay tuned right here for updated news and information on ChronoBlade.

Each week our resident Indie Gamer Nicholas takes a look at a different Indie Game that you may or may not have heard about. Join him on his adventures as he sifts through the rubbish to find The Indie Game of the Week.

Path of Exile feels like what Diablo III should have been. That’s what I’d heard people saying, anyway.

For my part, I wasn’t entirely certain whether or not to take them at their word, after all, the Internet has a wonderful way of running away with even the smallest shred of hype. After spending a bit of time with the game, though?

It?s true. Every damned word is true. Path of Exile may well be the closest thing to perfect the genre has achieved since Diablo II, and it honestly blows Blizzard’s efforts (which feel clumsy and uninspired by comparison) clear out of the water. That’s right, I said it: Grinding Gear Games has done a better job of creating Diablo than the game’s original designer.

Factor in that the MMO effectively represents the pinnacle of the free-to-play business model and it’s even more impressive.

Path of Exile, as the name implies, puts you into the shoes of one of seven different characters who’ve been exiled to the hostile, ancient land of Wraeclast. Each of these characters represents one of the game’s classes; each class is tied to one or two out of three attributes (Strength, Dexterity, and Intelligence, naturally). This is where it makes its first, most impressive divergence from the typical dungeon-crawler formula.

See, in Path of Exile, there is only one talent tree, and each character starts at a different area on that tree based on their primary attributes. The Witch and the Templar, for example, share one track that increases their mana regeneration, while the Duelist and Warrior share a Strength track. What’s more, these talents don’t actually give your character new spells or abilities.

Those are gained through gems you’ll receive as quest rewards and find scattered throughout the world of Wraeclast. As near as I can tell, these gems are class-agnostic (though what class you’re playing will have an impact on what gems you find earlier in the game). Socketing one of these magical stones into your weapons or armor will grant you access to a new spell or ability. As you level up, these stones and the abilities they contain will level up alongside you, gaining experience as they’re used in combat. Each of these stones is tied to one of the three attributes, which does limit somewhat which stones your character can actually use. If you’re using a fireball stone as a warrior, you’re not going to be able to level it up all that much before reaching the limitations of your abilities.

That said, the way Path of Exile manages talents and classes provides an unprecedented level of freedom, allowing players to build their character however they see fit, with only passing consideration given to their starting class. It’s an incredibly unique way of doing things, and it makes the game all the more addictive.

Another strange deviation from the traditional dungeon crawler is the absence of gold. Near as I can tell, all of Wraeclast works on a barter system. Trinkets such as scrolls of Wisdom (basically, Identify scrolls), Portal Scrolls, and Whetstones can be traded for items and equipment; loot you pick up in your travels can likewise be traded for scrolls and other small items. It’s a big of an odd system, and  one which does admittedly take some getting used to.

Now, as for the multiplayer component; Path of Exile can be played as a single-player experience, a multi-player affair, or an MMO. The folks over at Grinding Gear Games have accomplished this balance through the implementation of several different Leagues (and the ability to recruit people to join your party using notice-boards in the game’s settlements).  These leagues add a new angle of competition to the game, allowing players to vie against one another for a spot on the leader-boards. Players can even pay Grinding Gear Games to create their own leagues, with their own unique set of rules. A few example leagues include Iron Man (where players cannot trade with vendors, regenerate mana, or refill their flasks in town), Hardcore (permanent death), and Cut-Throat (permanent death and open-world PVP). Players and characters can move between leagues and will, and dying in a Hardcore league, for example, will only shunt the player and their character back to a standard one.  It’s a very interesting mechanic, and one I haven’t quite gotten to test as much as I’d like.

Anyway, I think I’ve nattered on enough. At this point, one thing should be clear: Path of Exile is an awesome game, and if you’ve not yet played it, you need to do so right now!

Grinding Gear Games has released a new trailer for its Path of Exile action RPG. The clip runs over two-and-a-half minutes and features plenty of looks at the game’s gorgeous presentation.

Path of Exile will also be releasing the third Act of their game which will further expand the content by 50%. Players will be able to explore abandoned docks, markets, temples and sewers in the ruined city of Sarn, all while trying to uncover the dark truth of their exile.